Does Auckland Peace Action have a problem with free speech?

With the recent events in Syria I have been quite active on social media, commenting on articles and posting links on various pages. One of the facebook groups I follow is an anti war group named Auckland Peace Action. Although I do not live in Auckland, I have participated in an event organised by this group – the 2016 protest against the weapons conference in Auckland. I have quite a lot in common with the values and beliefs of this group, and I am heartily supportive of their anti war activism. The upcoming Peace Action event ‘Picnic for Peace’, an alternative to the mainstream Anzac commemorations, is something I wish I could participate in. I hope that the fact I have written multiple blogs   about this will convince readers, and hopefully Peace Action members and supporters, that I passionately share the same critical anti war views.

Not long after posting comments on the Auckland Peace Action facebook, I received this comment from one of the page administrators: 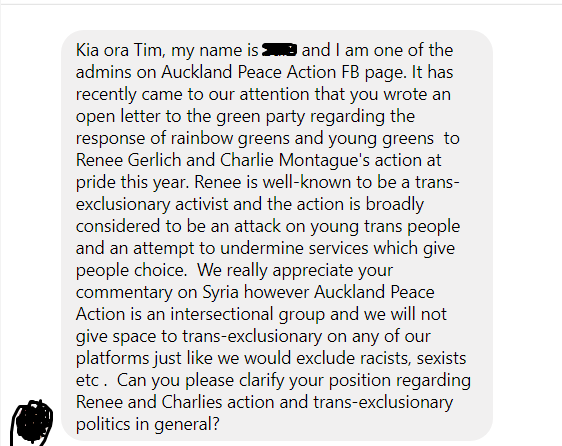 For the record, it is true that I came out publicly in support of Renee and Charlie’s brave protest action.

Here is the message I sent in response:

I'm glad you appreciate my comments on Syria. This is a complex and divisive subject which attracts a lot of heated debate within the left. I strongly believe that people in the anti war movement and the left more generally need to have these sorts of debate. When the issues are complex and multifaceted and the potential outcomes important and a matter of life and death, we need to have open debate. When people's emotions and ideological presuppositions are challenged and subjected to scrutiny because of this sort of debate, we need to continue to have this sort of debate. We should not demonise or make slurs against our opponents to short cut or dismiss their arguments, we need to engage (passionately and respectfully) in that debate. This sort of approach is absolutely necessary for a strong, thoughtful and open minded left to develop and grow.

The exact same approach should apply when it comes to discussing the ideas and politics of trans issues. I believe that Renee Gerlich and Charlie Montague have engaged in good faith, and I fully support them. I have contributed to this debate also, and I stand by every word I have said on the topic. I resent strongly the insinuation here that Renee, Charlie and I are 'transphobic' because we contest notions such as gender identity. Having said that, I fully support your right to speak against our views - I welcome any debate or discussion if it is made in good faith.

It is interesting that people resort to slurs when they engage in topics close to their hearts. When discussing Syria, I am sometimes tempted to throw around words like 'islamophobic' and 'racist' when engaged in debates with people who have pro Assad positions. I resist this urge, and do my best to stick to discussing the issue without making attacks on the supposed moral integrity of my opponent.

So, strangely enough, I find that I have friends in my social media circle who I strongly agree with regarding gender, but strongly disagree with when it comes to Syria. There are no doubt other heated issues where we have some commonalities and some differences. As an adult who cares about the ability of people with different opinions to communicate, discuss and develop arguments and ideas, I find it extremely concerning that you appear willing to cut me off because I disagree with you on trans issues. I hope you think carefully on this issue and change your mind about this infantile and regressive stance.

My question therefore: does Auckland Peace Action support the right for me to speak to them and others who visit their facebook page about things I agree with them about, even though there are other topics (which I promise to remain silent about while on their platform) which we disagree on?